Make these easy homemade apple cinnamon dough ornaments this holiday season. This cinnamon applesauce dough ornament recipe is perfect for crafting with kids, hanging on your tree, or gifting to friends and family!

For a couple of years now, I’ve been making DIY Scented Pinecones, which smell SO heavenly! As soon as Halloween is over, I start making them and filling our home with the warm, sweet-spicy smell of cinnamon.

Then I started thinking about how I could share the sweet fragrant goodness with friends and family. The pinecones are GREAT, but there are plenty of people who do want pinecones sitting around their homes.

So I put that thought in the back of my mind and went on with life – that’s when I get my best ideas!

In the meantime, I had been wanting to make salt dough ornaments and began searching for recipes.

That’s when I came across apple cinnamon dough…could that be the answer?

Well, the answer is a resounding YES!

These easy homemade cinnamon applesauce ornaments have become one of my favorite holiday crafts! I’m all about easy projects, and this project couldn’t be any easier!

Plus, the ornaments fill your home with such a rich, heavenly cinnamon fragrance AND they look incredible on your tree!

Grab the kids and let’s get started on some crafting fun!

Here’s everything you’ll need to make these ornaments. They’re simple in every way!

NOTE: for the exact measurements and ratios, please grab the handy printable recipe card at the bottom of the post!

I love these ornaments and the fact that they make terrific DIY gifts! If you want to change things up, here are some ideas:

Apple cinnamon dough ornaments are so much fun!

Here are a few commonly asked questions from readers. If you have a question about apple cinnamon dough ornaments that you don’t see answered, please leave it in the comments!

No, they’re not edible. They’re for decoration only. 🎄

Can I loop my twine through the ornament instead of gluing it to the back?

Yes! If you would prefer to insert your twine THROUGH your ornament to make it a little sturdier, make a hole in the ornament before you bake it.

Just take a toothpick, straw, or something similar and make a hole big enough to insert a string of twine through it. Bake as normal. Then, after your apple cinnamon dough ornaments have cooled and been decorated, you can add your twine as a hanger. 😁

Can I use frosting to decorate these snowflakes?

You don’t want to use anything edible on these because it would go bad AND ruin your ornaments. Plus, it could attract unwanted critters or cause your pets to eat something they shouldn’t.

That’s why puff paint is PERFECT for this! It also looks WAY better and is easier to work with! 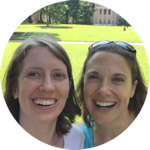